CLOSE
Home Press Releases
The latest press releases to come from the overseas property market - read what they have to say about what!

Property portal Properazzi.com is today launching property search in the United States, adding more than a half million USA properties for sale and rent to its existing coverage in more than 50 countries. U.S. properties for sale and for rent will be fed to Properazzi.com from Network Communications Inc. (NCI), the leading publisher of printed and online real estate information in North America, and Manhattan firm Halstead Property. This expansion will introduce American agents to Properazzi.com’s monthly audience of one million international property seekers.

“Properazzi.com helps real estate professionals market their properties to hard-to-reach buyers in new markets. We’re already successfully doing this for UK and European agents, and are delighted to extend our services to US agents,” says Properazzi CEO, Yannick Laclau. “International buyers are finding the US real estate market appealing for its long-term stability and increasingly affordable prices, so entering the American market is the next logical step for Properazzi.”

END_OF_DOCUMENT_TOKEN_TO_BE_REPLACED

The official launch of The Chicago Spire was on the 26th September at a prestigious event in Millennium Park, Chicago. A specially invited audience heard presentations by the two men who have brought this major new development to Chicago.

Architect Santiago Calatrava provided insights into his inspiration behind the 2000ft spiralling structure that will be home to 1200 condominiums when it opens in 2011. Garrett Kelleher, head of Shelbourne Development Group Inc., the driving force behind the project, gave his vision for a building that has already generated considerable interest across the world.

END_OF_DOCUMENT_TOKEN_TO_BE_REPLACED

As part of their drive to convince the rest of the world of their cultural sophistication, the Abu Dhabi authorities are planning a branch of the Guggenheim museum on Saadiyat island. The museum building, designed by internationally acclaimed architect Frank Gehry, will dwarf Bilbao’s version, and at a planned 300,000 sq ft, will be the largest Guggenheim museum.

END_OF_DOCUMENT_TOKEN_TO_BE_REPLACED

With an estimated shortfall in housing construction of 270,000 units, it would seem that Pakistan is ripe for foreign investment in its real estate market.

The latest news is that the SECP has made public its draft recommendations for the framework. The SECP has now embarked on a consultation exercise with the property sector on the subject but there still doesn’t appear to be a target date for the advent of REITs. Furthermore the draft recommendations do not seem to shed any light on subjects such as foreign and non-resident holdings in REITs and the repatriation of dividends.

END_OF_DOCUMENT_TOKEN_TO_BE_REPLACED

The latest Mercer ranking of cities by cost of living places Moscow, London and Seoul in first, second and third place. Mercer’s own analysis of the rankings gives prominence to changes in exchange rates, and particularly, the fall in the value of the dollar, as the chief ‘motor’ for moves up or down the list. However, in the case of London the change from 5th place in 2006 to second this year is also ascribed to higher property rental costs. Of course, transport costs for London residents are another factor helping the city up the scale. Glasgow (up from 60th to 36th) and Birmingham (up from 69th to 41st ) are among those cities to have moved furthest.

For a true appreciation of what changes in rankings mean for people on the ground it’s important to be aware of developments in Mercer’s benchmark city, New York. The benchmark itself does not remain static; New York housing costs are reported to have risen by an average of 6.5% in the course of 2006. In the US, the consumer prices index rose 3.23% in 2006 and the rise in the 12 months to March (when the Mercer survey was conducted) was 2.77%.

These increase in New York costs of living need to be borne in mind when considering Mercer’s cost of living indices for other cities (which are all relative to New York). So far the serious softness in much of the US housing market does not appear to be showing up in Mercer’s figures.

Although a cost of living survey is necessarily a somewhat blunt instrument for accessing real estate in the different cities covered, the Mercer report does throw up some interesting contrasts, nevertheless. Focusing on places covered by Overseas Property Mall in the last few months, it’s interesting that Bratislava is not only more expensive than Prague again, but costs of living there have risen considerably more sharply in the last year.

Berlin continues to be slightly cheaper than Munich or Frankfurt though all three have risen up the table as a result of the increased rate of exchange for the Euro. Sofia is Europe’s least expensive city (ranked 108th). Athens, Barcelona and Madrid, also affected by the Euro’s rise, have all risen a long way up the table in the last year.

Outside Europe, Dubai and Abu Dhabi have both slipped down the table a little. Does this reflect a measure of stability in property prices and rents in the UAE? Interestingly, Dakar in Senegal is higher up at 33rd with a substantial increase in its cost of living index. However, this is probably mainly a reflection of the fixed exchange rate the CFA franc enjoys with the Euro.

Finally, it is worth remembering that Mercer’s methodology is based on the similarities in spending patterns among people in middle and higher income brackets no matter where they originate from. The rankings are of limited value to those relocating themselves, say as a matter of lifestyle choice, who are happy to do as the Romans do when in Rome.

The Caribbean is a playground of the rich and famous. It is also seen as business-friendly. Perhaps surprising, then, that some Caribbean countries have strongly restrictive almost socialist-style housing market systems, with strict rent controls, and strong security for tenants.

In a study, the Global Property Guide examines the landlord and tenant systems of 19 Caribbean countries and territories in terms of rent control, security deposits and tenant eviction. With contributions from local law firms, each economy is rated as strongly pro-tenant, pro-tenant, neutral, pro-landlord or strongly pro-landlord.

The study notes that, against popular notions, a ‘pro-tenant’ rental market is actually harmful to tenants in the long run. It discourages landlords from investing in new rental units, leading to less supply. As demand for rental units increases with population growth, shortages develop. Landlords lose the incentive to maintain and upgrade their rental units. The quality of the existing rental housing stock deteriorates.

The most restrictive rent control law in the Caribbean is enforced in the US Virgin Islands. For housing accommodations, the maximum rent ceiling is the rent in force and in effect on July 1, 1947. For buildings created and/or rented after July 1, 1947, the maximum rent allowed is the first rent charged for the unit.

END_OF_DOCUMENT_TOKEN_TO_BE_REPLACED

The winners: Singapore, South Korea and the Philippines

South Korea also saw a strong rebound in property prices, despite continued efforts by the government to depress the market. The Kookmin Bank’s house price index rose 11.6% in Dec. 2006 (9.3% in real terms) from a year earlier.

In the Philippines, strong economic growth and reduced inflation contributed to the continued recovery of the real estate sector. In addition, demand from Overseas Filipino Workers (OFWs) and dual citizens has been strong, pushing prices up. Luxury condominium prices in the Philippines rose 15% (9% in real terms) in 2006, following an 11% nominal price rise in 2005, according to Colliers International.

END_OF_DOCUMENT_TOKEN_TO_BE_REPLACED

The real estate market (particularly luxury apartments and commercial properties) in Shanghai, China has been the fastest growing in the world with annual capital appreciation at 20% in the last 10 years. Property Frontiers’ has just launched a cutting edge website Invest In Shanghai dedicated to information relating to the buying process, economy, steps and issues involved in purchasing investment property in Shanghai, China. It is available on http://www.investinshanghai.co.uk/. 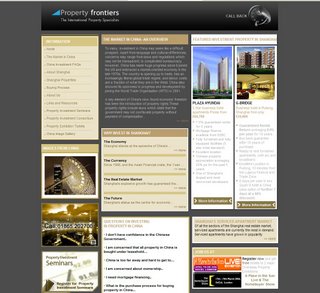 Dec 20, 2008
0 3059
As the US real estate market continues to perform in a depressing fashion, home owners in Canada are also starting to feel the bite...