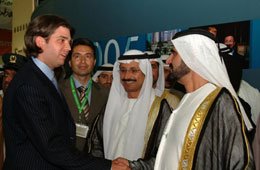 Donald J. Trump, Jr., son of Donald J. Trump, and Executive Vice President of Development and Acquisitions, The Trump Organization, is in Dubai this week to reveal details about the new design and discuss The Trump Organization’s increased involvement in the UAE. Speaking at the Arabian Hotel and Investment Conference (29th April to 1st May), he will discuss mixed use developments & condo hotels and feature in a round table discussion on private equity in the Middle East. On the 2nd May, he will be present on the Nakheel stand at the Arabian Travel Market.

Trump International Hotel & Tower, The Palm Jumeirah is the initial development in Nakheel and The Trump Organization’s joint-venture in the Middle East, which includes exclusive rights for 19 countries in the Middle East region and 17 major brands. It is also the first UAE property in the portfolio of Nakheel Hotels & Resorts, Nakheel’s hotel and resort investment company, which was launched in February this year.

On announcing the partnership in October 2005, Donald J. Trump, Chairman and President of The Trump Organization, who is known throughout the world for his luxurious real estate developments, stated that the organization’s architects and designers would engage closely with Nakheel Hotels & Resorts on the design. The results of the partnership have now been released.

The US$600 million Trump International Hotel & Tower, The Palm Jumeirah is a stunning 48 storey mixed-use hotel and residential building, anchoring the trunk of the 5 by 5km man made palm tree shaped island which lies off the coast of Dubai. The first of three such islands to be built in Dubai, The Palm Jumeirah will be one of the world’s premier resorts, offering a wealth of beachfront hotels, residences, retail and leisure.

In redesigning the property, we focused on creating a magnet for tourists and residents and a landmark icon on the Dubai skyline. Trump International Hotel & Tower, The Palm Jumeirah will soar into the sky, its twin sets of glazed diamond shaped structures at the top of each tower creating a sense of infinity as the glazed elements blur building and sky

Sultan Ahmed bin Sulayem, Executive Chairman, Nakheel stated: ‘The new design ensures that the property will be a striking landmark – a bold monument at the heart of the island. The property’s taller, more slender design allows for a linear view through the building to the top of the island and provides spectacular panoramas of the island, Dubai and the Arabian Gulf, with all rooms benefiting from a sea view.’

‘In building the vision of Dubai, Nakheel is committed to creating genuinely unique projects which are at the forefront of innovation”, Sultan Ahmed bin Sulayem continued. “The new design of the Trump International Hotel and Tower lives up to this commitment and will provide a fitting landmark centerpiece for The Palm Jumeirah, our flagship development. ‘As the world’s fastest growing city, it is important that Dubai forms progressive partnerships with prominent international organizations. Our alliance with The Trump Organization is a fantastic example of how such partnerships can operate successfully. The Trump International Hotel and Tower is the first example of this success’